Diving in Kenya is generally good all year round, although visibility lessens during July and August due to silting and high seas. The weather is consistently warm and sunny, with excellent water temperature that makes for great diving conditions. October to March is the best time for diving.

View all dive resorts in Kenya

The Sands at Chale Island
USD 1,505Per person for 7 nights for 2 divers

The Sands at Nomads
USD 1,510Per person for 7 nights for 2 divers 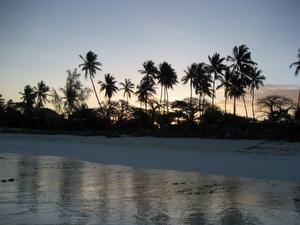 Well, we all know its in Africa... but where exactly??? Kenya is in Eastern Africa. It is bordered by Ethiopia to the north, Somalia to the east, Tanzania to the south, Uganda to the west, and Sudan to the northwest, with the Indian Ocean running along the southeast border. The country is named after Mount Kenya, a significant landmark.

Divers visiting Kenya typically dive in one of the large marine reserves:

In the island archipelagos of Northern Kenya, around Lamu and Manda, new dive sites are currently being explored and made accessible. The reefs along the Kenya coast are extremely diverse and all standards of diving can be found to suit even the most fastidious diver.

Currency
Note - Travel to any destination may be adversely affected by conditions including (but not limited) to security, entry and exit requirements, health conditions, local laws and culture, natural disasters and climate. Regardless of your destination, check your local travel advisory board or department for travel advice about that location when planning your trip and again shortly before you leave.
BOOK A DIVE VACATIONFind a local Dive CenterLearn how to dive